The young For Austria is already standing in the exemplary type of peeler, large-framed and harmonious. The best interior values, an optimal willingness to perform and three basic gaits at a very high level give a glimpse of the qualities of a future dressage horse of special quality.
In 2017, For Austria, then called Florenziko, was the acclaimed prize top at the elite foal auction in Vechta.

Descent
For Austria's father For Romance I OLD was a Burg Cup finalist and is successful with Therese Nilshagen (SWE) until Grand Prix. He was a celebrated Oldenburg winner's stallion, main premium winner and stallion of the year 2019. His foals achieve top prices at auctions and his first basket vintages have exceeded all expectations with several licensed sons and premium stallions. In the meantime, he has more than 30 licensed sons, numerous premium mares and championship winners.
For Romance' full sister Fasine won the National Championship of 6-year-old dressage horses and advanced to the top of the 36th PSI Auction. In the meantime she is successful in dressages up to Intermediaire II. The mare strain of For Romance I OLD goes back to the important Voltaire.
Mother father Diamond Hit is considered an international top sire. He himself was four-year-old runner-up and runner-up, as well as five-year runner-up and runner-up. In 2005 he was appointed VTV dressage stallion. Numerous participants of the Bundeschampionate and the World Championships of young dressage horses carry him in the pedigree. His son Dominy became the 2017 National Champion of 5-year-old dressage horses. Even internationally successful up to Grand Prix, more than 110 offspring in S-dressages are successful in Germany alone.
Diamond Hit can refer to soon 70 licensed sons. Among others, Don Diamond, who was the South German Körsieger, Landeschampion, Süddeutscher Champion and Runner-Up- In 2012 he was named Masters Stallion of the Year.  Among his most successful descendants are the team bronze medallist of the World Championships in Tryon 2018, Hawtin's Delicato under Carl Hester (GBR), Loxana under Daniel Bachmann Andersen (DEN) and Della Cavalleria OLD under Victoria Max-Theurer (AUT).
For Austria comes from the mare tribe of the Golden Gate. His mother is the half-sister of the successful Lord of Loxley (Hans Peter Minderhoud, NED).
Halbruder Floral Hit of Florence was top foal of the elite auction in Vechta 2016. It was sold for 120,000 euros.
Half-sister Feodora was the winner mare of the mare show of the PVZ Ahnsen in 2019. In the same year she was a reserve-winner mare of the district mare show in Beedenbostel. She passed the mare test (ZV Hannover) with the following grades: Step 8.5 Gallop 8.5, Trab 9.0. Feodora is also highly placed in riding horse trials.
Also the licensed stallions Charme, Atrejou, Law and Order, C'est la Vie (S-Springen), Borowski and our Florence (lntermediaire I) belong to For Austria's mother tribe. Other S-successful dressage horses are, for example, Groszor (Adrian Lopez Diaz-Pavon, ESP), Rudi (Rochelle Kilberg, CAN), Tempo Ene HM (Guillaume Lundy CNE, FRA), Solo Dancer (Friederike Wolf) and With Me (Nina Kuckartz).
Deze tekst werd automatisch vertaald. 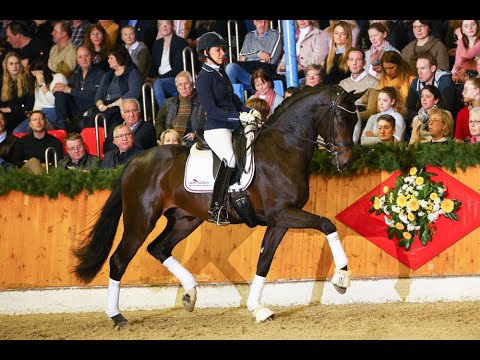